Why Would I Need a Fuse Box Inspection?

Home > Electrical Contractors Blog > Why Would I Need a Fuse Box Inspection? 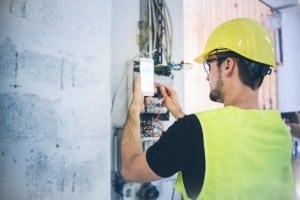 These days, most homes are built with a circuit breaker rather than a fuse box, but if you are buying or already live in a home that still uses a fuse box for electricity, then it’s a good idea to have a fuse box inspection from time to time. Contrary to popular belief, fuse boxes are not dangerous if they have been installed and are still being used correctly. However, due to the large amounts of electricity that most homes need to keep up with modern demands, we find that many fuse boxes have been rigged in such a way that they have become a fire hazard.

A fuse will only handle the amount of current it is rated for. So if more amperage passes through the fuse than it allows, the fuse blows and kills the power. When the fuse blows, it needs to be replaced, as opposed to a circuit breaker that just trips and only needs to be reset. Because of this inconvenience, people with fuse boxes will use fuses that are too large for the wires to prevent the fuse from blowing and needing to be replaced. However, this is a potential fire hazard and should be avoided.

Another problem we see during a fuse box inspection is seeing several wires being connected to the same fuse, which also causes a fire hazard. Homeowners want to have more electricity available to them in their homes, and this often leads to an overloaded fuse box.

During your fuse box inspection, we can make sure that all wiring is done according to code and is safe. If you decide that you are ready to upgrade your system to a circuit breaker so you don’t have to mess with blown fuses anymore, we can do that, as well.

About Quality Electrical Contractors in Greenville

If you’re wondering, “Where can I find dependable electrical repair services near me in Greenville, South Carolina?” reach out to us at Quality Electrical Contractors.